So, I still keep trying to work cloth diapers into my DD’s diapering system. The bf is very reluctant to do so, so I want to try to find easier solutions for him. I got a new diaper cover from one of my local grocery stores, strangely enough..a Cutey Baby Wrap, which we’ll be trying out too.

Diapers are pretty pricey though, and since I love being a diy-er, I wanted to try making some pocket diapers.  With printer out of ink though, I had to try and draft a pattern myself, and well..I’m certainly not the best seamstress yet so my edges are kinda funky. haha! But, as long as they function I could care less. 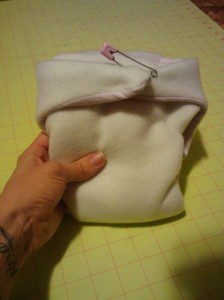 All I did was measure my DD, waist and rise (rise is from belly button down between legs and up the back) and then doodle on some newspaper until I got a shape I liked. Referenced a few of her cloth diapers for it, and left a 1/4-1/2 seam allowance. I used some fleece for  the outer, and t-shirt for the inner. 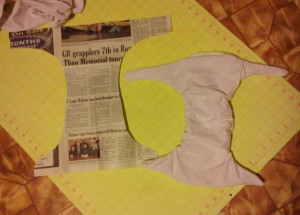 I especially like how pointy my edges seem to have gotten…dang! haha. So have no fear if you can’t sew. Neither can I, and I got it just fine! I just cut my two pieces (make sure to put the sides you want facing out pointed inward when you sew) and I pinned around, making sure to leave about 2″ open on the back side so you can stuff your insert into it.

I may topstitch around these too, but eh they seem alright just with that sewing and turning. Did I mention I’m lazy? 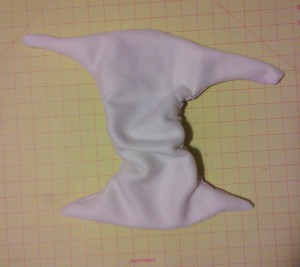 I used 1/4″ elastic on the legs. I tacked down one end with a zigzag, then streeeetched it tight and sewed down, tacking it down well on the other end. I did not make them a casing (lazy). We’ll see if I need to add that as well…

I am just using some of DD’s prefolds as inserts, as they fit quite nicely actually! (she’s a toddler of 19 months atm) just folded into thirds and stuffed in there. 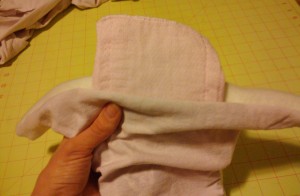 We’ll put these to the test (I’ve made 2 so far) to see how they hold up. Also what the bf’s verdict is on them. I’m going to get some of the disposable & flushable liners for bf’s sake too.

I did not add any snaps or velcro btw… 1)couldn’t find the damn velcro and 2) I can’t find a snap press like I want anywhere near me. I want to add some snaps once I can get a press. Probably going to be from ebay.

I’ll update on how these are working out.

UPDATE: Huzzah! I tried one out on her last night for bedtime..figured that’d be a good stress test. I can fit 2 of her prefolds into one, and then put one of her covers over the whole thing. NO LEAKS!! Though she managed to take the whole thing off first thing upon waking this morning. 😛 Velcro is quickly a no go for me. So yeah!! I’ll be making more of these 🙂 and working on some longies for her to cover her booty. hehe.

So I’ve been trying to improve upon my sewing skills, and I figure what better way than to make something worthwhile and green? 🙂

First thing I made last night was a reusable duster. I followed this pattern (http://www.flickr.com/photos/merwing/2057552929/sizes/o/) and made mine out of fleece.

It works pretty darn well too! Only took maybe 5 minutes to make. How cool is that? 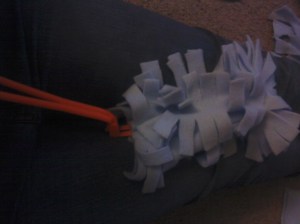 I would like to make one like this (http://sewmuchado.blogspot.com/2010/02/tutorial-reusable-swiffer-duster-cloths.html) but the only flannel I had I wanted to save for project #2. ..

Project #2 is cloth wipes! I order some off etsy earlier, and figured hey I can totally make these! 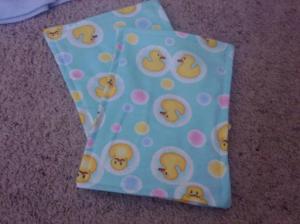 Also really easy to make! And nice and durable 🙂 Plus they have duckies! Just need to find some devil ducky fabric now…. 🙂 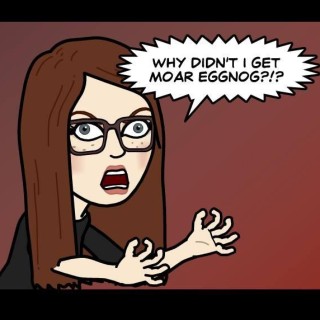